And rather than each of us writing a separate blog on what we learned (like 4 book reports), we compiled it into one post; four little short stories about our experience. Feel free to read all or just a few. We won’t take offense. Or...if you attended - share with us what you liked the most or least?

I found Stephanie Rieger's talk, “Imagining the Physical Web,” incredibly interesting. Most of the other panelists spoke of the present, or the near future, but Rieger was the only one who took some bigger conceptual leaps during her 20 minutes.

The physical web, as defined by Google, is "an initiative to create an open standard that extends the web we know today into the physical world.” This burgeoning technology might begin to answer the question, how can we more successfully, as Rieger put it, "use the web to its full potential"?

Rieger describes the 2 primary components of the physical web:

Stephanie Rieger's thoughts about the physical web are absolutely fascinating. We're definitely ready for a paradigm shift in terms of our thinking about the web and its utility. Rieger questions whether "websites [might be] unnecessary vestiges of a time before there were better ways to find things to look at on your computer or your phone." I do think that the web is capable of so much more than what we're using it for today. Rieger wonders if "the web is something that we're bolting on" at the moment, rather than "as something that could drive, enhance, disrupt." Personally, I'd love to see a more disruptive web.

One thing I often forget when building web applications is how impactful and important it is for the world. In my day to day I’m thinking: “How do I fix this problem?” or “How can this experience be better?” But it doesn’t add up until months later I realize the magnitude of what I’ve built.

But Responsive Field Day was a great reminder that we are a part of building something that is interacted with by a multitude of different people with different capabilities all across the world. At RFD we were introduced to a web application called Ushahidi that was presented by one of Ushahidi’s senior designers, Sophie Shepherd.

Most of Ushahidi’s users are located in Africa. The application was born from the necessity to view reports of violent activities near to the user’s location. The usefulness of the app expanded from reports of violence to other useful insights like nearby places for refugees to sleep, nearby protests, and other useful information.

We are reaching an age where many of these people who lack access to modern day technology conveniences, have smart phones. They are using smartphones to access a web application (like Ushahidi) from a browser on their phone with limited connectivity. They don’t have to download a native app, they can just instantly browse and receive data when they have it.

Even in the United States our data connectivity is spotty at best in major parts of the country. What kinds of services could we build with these technologies, even in spotty connectivity?

Ushahidi is built on a frontend framework called AngularJS. AngularJS, and other frontend javascript frameworks, remove the need for a page refresh and have the capability to download the entire application the second we hit the page.

This really hit home for me after working on Ember.js for the past year and realizing what an asset to the mobile world it could be to use a framework like this to build in an “in flux - online offline” state.

The overall event was very well organized and extremely affordable. I believe a ticket cost $175. When an event like this costs an amount I would actually pay out of my own pocket, if necessary; I think that is a great deal. I really hope the folks at Cloud Four will put this on again.

A standout presentation, for me, was Tom Dale.

Tom Dale, one of the creators of Ember.js, was very enthusiastic. He was not exactly preaching to the choir, as most of the other presenters were, since Ember is still making a name for itself in the web development world. So he had his work cut out for him.

He was specifically addressing Progressive Enhancement and trying to make the case that in a world of more powerful and capable devices, connectivity is becoming the barrier to reliably accessing sites and not the lack of JS. His solution to this barrier was that we should be making off-line apps, so when connectivity drops, your experience would not be hindered.

He also stressed how when something is a default, like JS being turned on in a browser, it is less likely to be changed. So building sites toward a browser's defaults is a pretty safe bet.

I'm still not 100% on-board the JS framework train. I was brought up in world where JS wasn't always a given and you didn't want to rely solely on it. I know there are benefits to a full JS site and browsers are more capable than they have ever been. I'm still just a little old-school and like some plain old HTML to fall back on. Ya know, in an emergency.

The event had some heavy-responsive-design-world-hitters present, and I thought starting off with Brad Frost was excellent. Not because he had a talk about what we should do/not do; or what we should think about as we design. But rather, he set the stage in such an appropriate way for the event, and for our lives and designers and developers.

His talk “Looking for a place to hang my hat” was more of a supportive talk for all of us on how to deal with all the MORES that hit us from day to day; more devices, more tools, more expectations, etc. I laughed a number of times, not because of silly Billy Madison video he referenced or his job post (see below for the required tools applicant must need to know), but because a lot of what he presented I totally related to day-to-day. 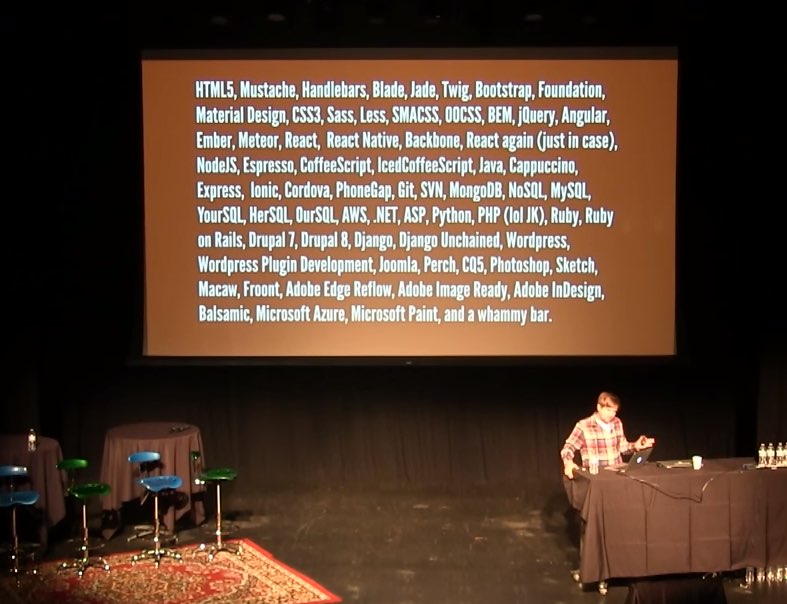 How do we keep up with a world that changes so rapidly, with roles that add on, and tools that seemingly multiple overnight like bunnies. How can we ever be certain we are doing the right thing when it seems that what we think today is challenged tomorrow? How can we possibly keep all the rules, ideas, techniques straight in our head when we are also bombarded with expectations and budgets and deadline.

Some Tips His tips were helpful and also familiar. His acknowledgement that there’s a lot of shit out there bombarding you every day - and it likely won’t change was strangely comforting. It was a reminder that regardless of experience, expertise, “stardom” in the industry - we are all in the same boat together, facing the same demands and we are all still learning. Some takeaways:

There were more key ideas - and lots from the other speakers you should check out. But for an intro, to the event - this set the stage for - there’s a lot, and it’s okay. We’ll get through this.

Overall, the conference was great - the speakers were even greater - and it gave us all some ideas that we could take back home. If you went, what was your experience?

Annie is our Design Strategist who spends her time focused on design through research, experience mapping, personnas and usability audits, scenarios and more. When not wireframing, you may find Annie tasting the latest craft brew or biking around Portland.