A Redesign for the Future

Our work with the Portland-based Meyer Memorial Trust (MMT) recently launched and the first applications to enter its new system are making their way to MMT this month! In this post, we wanted to share our process for building the grant management database, the lessons we learned, and the result of almost three years of working together with MMT.

The Breadth of MMT

It’s not everyday that you get to work with an amazing organization that focuses on making Oregon a more awesome place to live and work. Focusing on change in the environment, social welfare, and education, Meyer Memorial Trust funds millions of dollars every year to local non-profits who meet their vision of a flourishing and equitable Oregon.

To throw some numbers of their reach, by 2015, MMT had paid out nearly $692 million through more than 8,200 grants and program related investments. As a financial number that’s impressive.

Now, when you think about the data that’s behind those numbers – that’s

The amount of data transferred in order to distribute and manage available grants is astronomical!

That is where our work began, in 2013, when we met MMT to discuss the state of their GrantIS database system – or the system that managed the astronomical amount of data.

The history of GrantIS

GrantIS 1.0 was born in 2005, when Meyer Memorial Trust reached a pivotal point in their process to fully transition grants management online. Their choice was to either invest in commercial off-the-shelf software or build their own customized system. Given the high cost of the commercial software and the specific needs of the organization, MMT decided to build its own open source based system.

By 2013, the programs MMT funded had changed focus and the team structure and processes that managed it had evolved. As such, the database MMT had built almost ten years prior was struggling to keep up. Staff began to notice that their workflows were becoming inefficient. The application wasn’t as flexible as they needed it to be. The interface had become overly complex and muddled by years of requests and features.

GrantIS 2.0 was a chance to focus on program workflows, gain flexibility, and streamline processes.

Our goals became to

After our initial discovery meeting we developed a project roadmap that we could break into specific element-focused iterations. These iterations allowed us to not only have a rolling cycle of work from design to development it also let us adjust our approach to solutions in later iterations as we learned and gained more insight. Alternatively, we wouldn’t have been able to give a ballpark estimate or scope to the project.

For each iteration kick off, we took a deep dive into design strategy to understand the needs and identify the goals. Collaborating directly with MMT’s staff and users meant we could constantly check in with our direction and approach, and ensure we were designing solutions with users involved.

Internally we had dedicated leads for both tech and design to ensure we avoided any silos in our work. Leads held high level discussions on designs and implementation, throughout the process, to test ideas and feasibility as often as was needed.

The benefits of working with a local team are most prevalent in the amount of face-to-face communication we could have with various team members. While it’s never a deal-breaker to have a remote client, local clients mean an opportunity to bring more users into the conversation to discuss processes and workflows and to walk through design solutions together.

Additionally, the proximity gave our development team the opportunity to pair with MMT developers on an on-going basis, and to train and partner on the code and framework used, so MMT staff will be able to handle changes in the future.

Another takeaway from this project is seeing the benefit of working with an external agency to help an internal team think and work outside of the day-to-day. Reconstructing a tool that’s been learned, used, and added to for years is hard to rethink on your own. Having an external partner step in and dig down to the root of the goal and the objective of tasks was extremely helpful for MMT. With our team and approach, we could strip away the layers of learned behavior and discover new workflows that kept MMT’s process efficient and their workloads manageable.

Every project has lessons, and for a multi-year project there were a few.

To manage the project effectively we realized that we needed a modified approach for a multi-year project than we might use for a smaller project. The iteration roadmap we were able to create was helpful to both teams in the beginning, but became erroneous as we uncovered more about the scope of the project. What we roughly estimated in scope was sometimes a lot larger in reality and those iterations became larger than we envisioned and took longer than we estimated. Stepping back and taking a sprint approach might have allowed that flexibility.

For example, a sprint approach would have allowed our developers to flag larger tickets (ie. >1day) and break them down further into more manageable, smaller tasks. The resulting queue of tickets could then be prioritized and features could be implemented starting with the bare minimum of functionality in place, then our team could work their through the queue of prioritized tickets to add more functionality. This approach would have allowed us to test designs more frequently with the client and make adjustments, and would have resulted in a better forecast than the early roadmap of work to be done for PMs and our client.

From a design perspective, it was challenging to not want to change the design or style or rethink functionality as time went on and more was learned. Much like any project, after you sit with something for awhile, you get the urge to change it and want to rethink it. Keeping those needs at bay (or determining if there’s a warranted need to change) and also keeping designs consistent with patterns was a challenge. A style guide created early on could help keep patterns consistent, though the challenge of keeping the style guide accurate and up-to-date would be one to watch.

Kicking off with Design Sprints

At 14 iterations of work, the resulting GrantIS 2.0 is as enormous as the data behind it. However, the thoroughness with which each step in the process was designed, will provide MMT the efficiency they need to focus on the bigger picture. 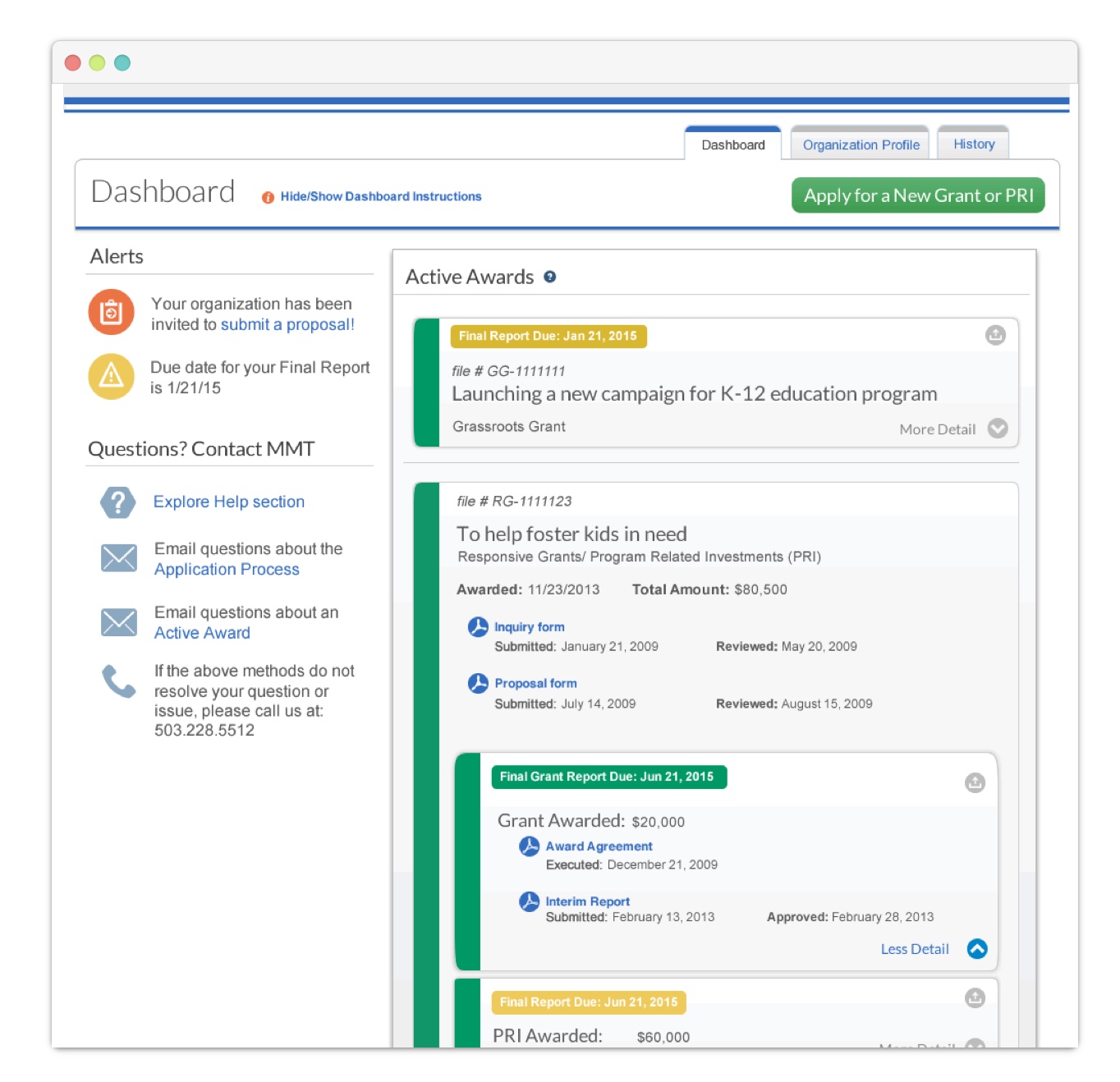 The final product includes a redesigned dashboard for constituents to track their registration, applications, and awards and their corresponding statuses. The constituent’s dashboard allows them to communicate directly with MMT about an application or grant and upload any documentation to support – a task that could only be done through email or by telephone prior to the redesign. 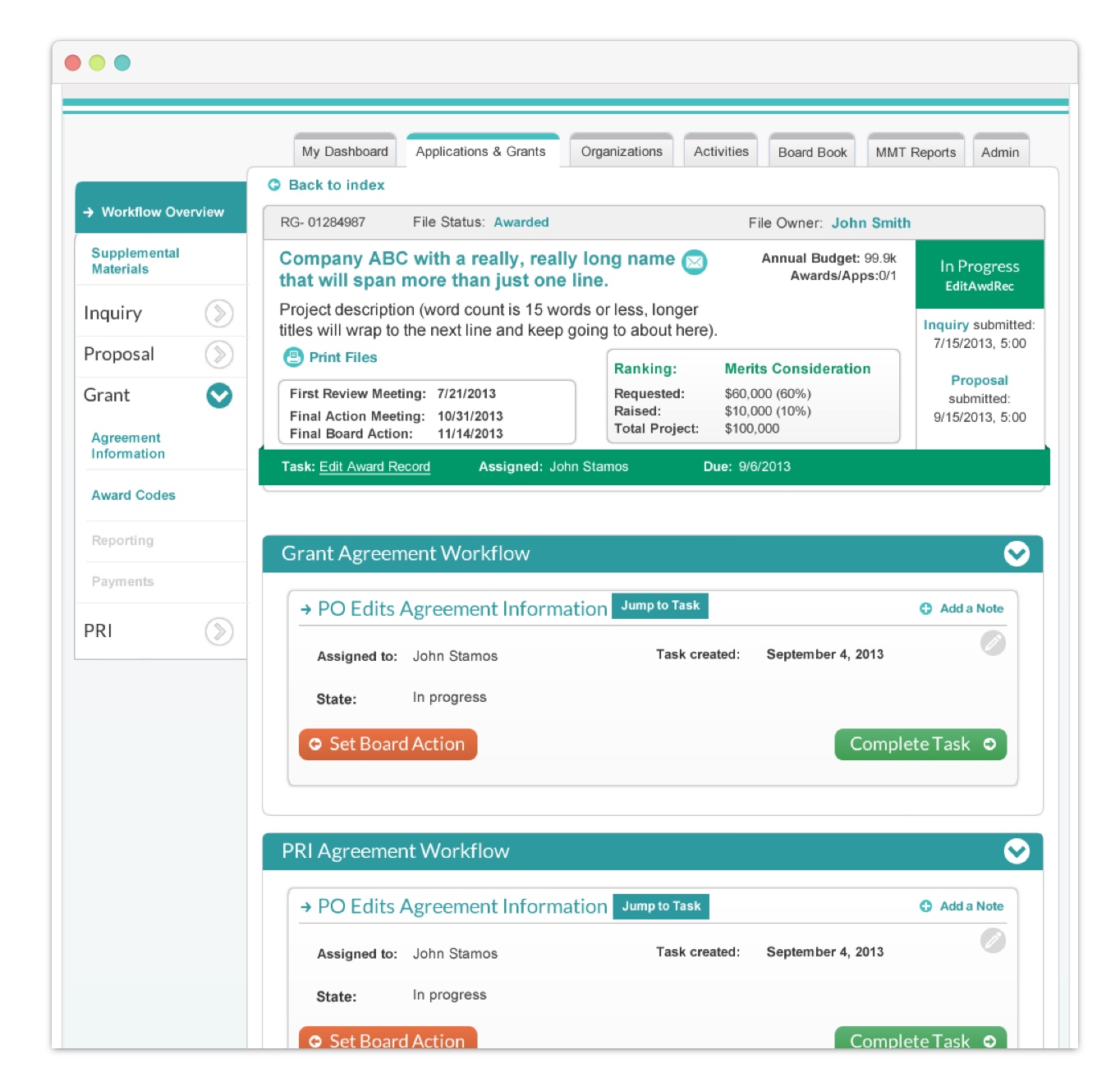 GrantIS 2.0 has a redesigned granting database that better tracks and links organizations to applications than its predecessor. Custom workflows built based on program type, allow staff to assign tasks, move tasks forward to ensure steps and processes are followed or send tasks back for revisions – providing accountability, as well as the ability to write notes and track information, all within that organization or application. 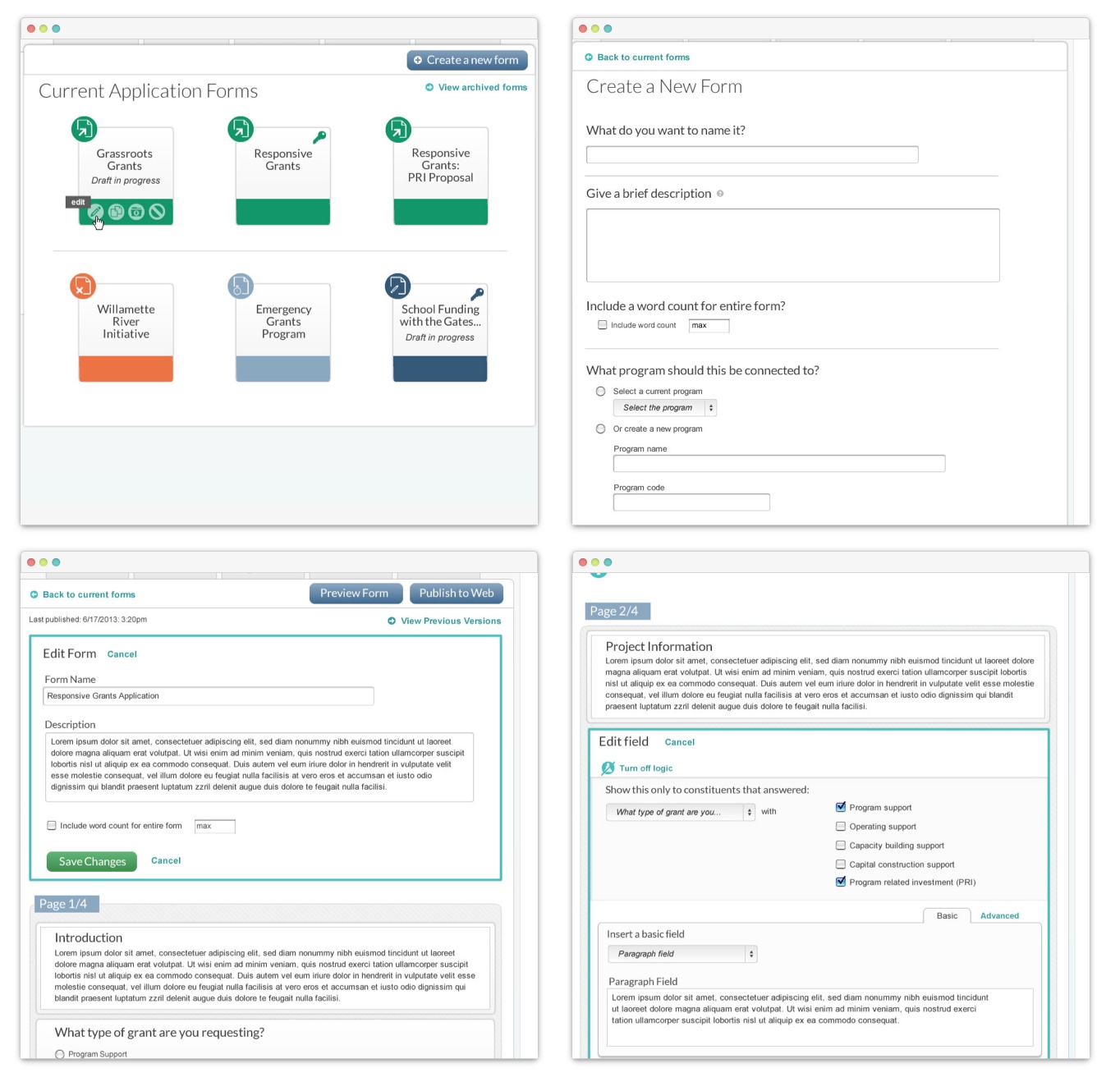 Administrators now have the ability to create custom program application forms at any time. Using a robust builder, admins can choose the type of questions they want to ask (from easy text fields to complex budget tables), manage specifics on those questions (like word counts and specific logic-dependencies on previous questions), order them on pages and sections, and control when the application is live to their constituents and when it’s closed. Previous forms had to be hard-coded and lacked the flexibility MMT needed when new programs were envisioned.

An application for the future

Our partnership with MMT gave us an opportunity to work through ten years of “that’s just how we’ve done it” and think more about an application that they could say “this is how we should do it”. We learned lessons in all disciplines from how to test designs earlier through a design sprint, to breaking iterations into smaller manageable development sprints. We also expanded our capabilities to think in new ways about how to manage data and keep track of information with things like workflow management, schemas, visual status indicators and states.

MMT has stated how much easier it is to create new programs for their constituents than it was prior when they had to hardcode new application forms and use workarounds in the application to make things fit with the system. Having that flexibility has already shown its usefulness as they recently reorganized their programs. MMT staff has also commented that at the same time the amount of technology that has been added, it hasn’t separated them from their constituents but has instead improved their connectivity.

Working with a local, compassionate team that has a powerful mission was a delightful experience. It’s rewarding to know that our work has truly aligned with our mission, to simplify lives through digital technology.

Annie is our Design Strategist who spends her time focused on design through research, experience mapping, personnas and usability audits, scenarios and more. When not wireframing, you may find Annie tasting the latest craft brew or biking around Portland.