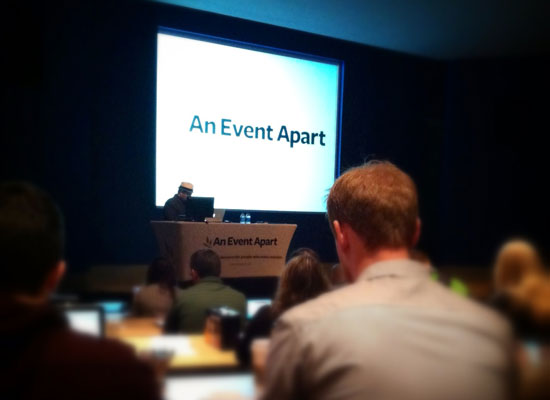 Last week, Brian and I sat with our peers in rapt attention at the Seattle occurrence of An Event Apart, the inspiring one-track web conference started by Jeffrey Zeldman and Eric Meyer in 2005. Known as “the design conference for people who make websites,” AEA is a particularly acclaimed web conference for good reason. Zeldman and Meyer, visionaries famous for helping shape the web as we know it, gather a dozen of the web’s most influential creators and gifted presenters to share their thoughts, inquiries, and discoveries with the several hundred fortunate attendees.

Since you were too busy vacuuming and/or purchasing groceries to attend, I’ve summarized the best parts. Enjoy!

“Software can be like boiled chicken; it feeds, but doesn’t delight.”

The first of Jeffrey Zeldman’s “10 Commandments of Web Design” was Thou Shalt Entertain. The humble 404 page – an element of the web that is as ubiquitous as it is useless for the great majority of people – is a fantastic opportunity to delight. While the rdio 404 states “Page Not Found,” a message lacking any personality or benefit, the New York Post 404 page apologizes and gives the user an opportunity to search the site or connect through a contact form. Truly, Zeldman’s entire list of commandments should be required reading for all web designers/developers. With Number 6, Love Thy User as Thyself, Zeldman reminds us of the importance of compassion: “Be good to people, meet them where they are.”

Also, I found it quite endearing and appropriate when Zeldman gave his blessing to a sneezing audience member.

“Every desktop design has to be touch-friendly.”

Josh Clark, as well as every one of the other speakers, reminded us that the web is changing, whether we’re prepared or not. According to Clark, 31% of adults in the U.S. own a tablet computer; the number of people using thumbs to interact with your site is growing more quickly than anyone imagined. As Clark says, “The iPad is the fastest-growing consumer product in the history of consumer products.” Of course, the prospect of designing for touch becomes particularly daunting when you consider the range of device sizes and contexts. Regardless, the path ahead is clear: digital is growing more physical, physical is growing more digital, and we must shape the web accordingly.

“It can always be simpler. It takes big changes to go small.”

Luke Wroblewski began his talk by noting that the top sites in the U.S. (Facebook, Yahoo!, AIM, Google, and YouTube) are all read/write experiences; in other words, “They don’t work unless people add (write) content to them.” Increasingly, people are adding this content using their mobile devices. Wroblewski informs us that 40% of all tweets were sent from mobile in 2011, 3 hours of video are uploaded every second on YouTube mobile, and eBay’s mobile revenue rose from $4 billion in 2011 to $13 billion in 2012. Although it has become much easier to create rich content from our devices, the experience is often far from ideal; so, how do we design for mobile creation? Wroblewski advises us to focus on these 5 critical design elements: one handed use, a visually engaging experience, focused flows, just in time actions, and cross device usage.

“Play around with this stuff. Experiment. Show your colleagues. Start a dialogue.”

Jen Simmons is understandably excited about the capabilities that are now available to us, thanks to the a number of new HTML5 APIs. Users don’t need to be online to use your website, content can automatically and instantaneously update itself, and your interface can give helpful feedback through sound are just a few of Simmons’ “9 new realities that are true about the web, and can be true about your project.” App Cache, Local Storage, Session Storage, Index DB, Web Socket, Web RTC, and Web Audio are only a fraction of the mind-boggling new set of features available to modern browsers. Now, according to Simmons, is definitely the time to think outside the proverbial box and experiment with the new tools at our disposal.

“The control that we told ourselves we exerted over the web was a hallucination.”

Once again, as Ethan Marcotte reminded us in 2010 – in this very convention center room – when he coined the phrase “responsive web design,” it is time to rethink our concept of the web. Marcotte pointed out that the territory of the web looks quite different than we might have imagined; for example, there are 700 million mobile users in Africa, with half of Kenya’s GDP moving through mobile money. So why are we still designing and building for cloistered, unlimited-bandwidth, smartphone monocultures? The average website weighed 320KB in 2009, today it weighs 1100KB; yet bandwidth increases have been nominal. As Chris Zacharias says, “By keeping your client side code small and lightweight, you can literally open your product up to new markets.” Marcotte closed with an important proposition: “Let’s design for reach, accessible for all; no matter what part of the territory they reside in.”

When I took a nap on the convention center couch during Erika Hall’s talk because I was hungover.

And I felt so much better afterwards. No doubt Ms. Hall’s talk was brilliant and moving, and it’s a shame that I missed it, but my head was pounding and I so desperately needed an hour of shut-eye. Also, there was a woman on a work call sitting on the adjacent couch, discussing deadlines and photoshop layers, and I found her voice quite soothing. Good thing Brian drank nothing but Shirley Temples the night before. Here is his take on Erika’s talk:

“Cultivate a desire to be proven wrong.”

Erika Hall reminds us to not just think about what our customers/users want in our project, but to ask them. Talk to them, get them into their comfort-zone, ask questions and listen. Even if we think we know what is best for our audience, that doesn’t necessarily make it so. We need to test our assumptions and interview people about their use of our project, ideally, in the environment where they might use it. Observe their behavior and redesign around these observations. It is better to fail early, during the research stage, than it is to launch a product and see it fail in the marketplace.

“Mobile phones are disrupting the market for their desktop cousins.”

55% of Americans use their mobile phones to go online. Of that 55%, 31% only or mostly use the internet on mobile. Karen McGrane informed us that this surprisingly high percentage only increases for low-income, hispanic, and black Americans. Although there are indeed tens of millions of mobile-only internet users, only 16% of consumer brands have a mobile strategy. Protip: now’s the time to become a mobile strategist.

“Ideas want to be ugly.”

Jason Santa Maria humbly pointed out that he has made and continues to make mistakes. He fills sketchbooks with drawings and ideas, yet sometimes still emerges from the depths empty-handed. “Sketchbooks,” Santa Maria tells us, “are not about being a good artist, they’re about being a good thinker.” Everyone loves looking through an artist’s sketchbook, and Jason Santa Maria generously let us peek into his. There were tons of drawings of letter. Tons.

“We are responsible for the things we are putting into the world.”

Mike Monteiro is just so quotable, so I’ll simply quote him. “You are in the confidence game. You are always convincing someone of something.” “You cannot put the onus of doing your job on someone else.” “Designers, you are in the service industry. You have clients and they need your help.” “‘How much does a website or an app cost?’ is really no weirder a question than, ‘How much does a bike cost?’” “Most people will never buy design in their lifetime.” “We forget that helping clients through the process is an integral part of the job.” “If it helps you do your job it’s part of your job.” “Most people have a limited understanding of what design is. It’s our job to help fix that.” “Eye-rolling is not a design skill.” “Stop waiting for an invitation to do your job. You are the expert in what you need.” And finally, “Trust your gut; it’ll do right by you.”

“How do you make a Unicorn?”

Why does Jared Spool think, as he asserts in the title of his talk, that “it’s a great time to be an experience designer”? Spool considers experience design to be the rendering of intent in the gaps, and it is the filling of those gaps that adds value. The user experience designer is a generalist, knowledgeable of copywriting, interaction design, information architecture, visual design, and so much more. Spool claims that these almost unbelievably capable creatures, which he calls Unicorns, do exist, and outlines the 5 steps required to become one: for each of the desired skills, one must train oneself, practice the new skills, deconstruct as many designs as possible, seek out feedback, and teach others.

AEA was an incredibly inspiring 2 days. The speakers were well-prepared and eloquent, the view of Puget Sound was awe-inspiring, the free drinks at the Media Temple opening night party were strong, the cookie jars were tirelessly refilled, and the lip balm made by a hobbyist soap-maker and fellow AEA attendee was creamy and long-lasting.

Jack, our Visual Designer, studied sculpture in college and fell in love with woodworking, ceramics, and printmaking. Later, after his inevitable move to Portland, Jack rediscovered his passion for digital media and began studying web design and front-end development. Jack worked with individuals with developmental disabilities for 5 years and taught Flash and HTML/CSS classes at a local technical college, uniting his passions for sharing knowledge with the fascinating world of code and design. Jack is an avid bike-rider, boomerang-shaper, music-maker, and walk-taker.