I started my career way back in the year 1996, fresh out of college with a Bachelor’s Degree in graphic design. I had spent the past four or so years learning the tools of the trade. Some of these tools were a bit older than others. Computers were starting to come on the scene in desktop publishing in a big way. So, interspersed in my curriculum were classes that represented the old and the new. In one class I might have been hand-lettering the alphabet with brushes and paint while in the other I might have been laying out a magazine-style article with copy and images on a Mac. It was quite the transitional period. However, no matter the technique I was using, be it old or new, the basis for everything was design. I was going to school for graphic design so I fancied myself a designer. It just so happened that design work was now accomplished with a keyboard and a mouse. 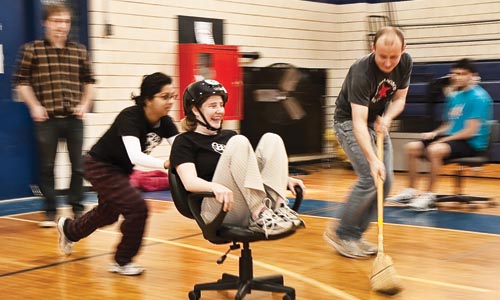 Once entering into the professional workplace at an advertising agency, I began to work my way up. Starting by doing the grunt work of a Production Artist and slowly moving up the ranks to titles like Art Director. As all this was happening, so was the internet. These were the early days of the blink tag and gray backgrounds, but the possibilities were evident and very exciting.

Here I was, a print designer at the dawn of the internet. Curious to learn more, I started to dabble a bit in HTML. The WYSIWYG editor in Adobe Pagemill helped me produce an actual webpage and AOL hosting actually put my creation online. This was amazing. I kept experimenting as the years went on and quickly picked up all the ‘web’ work that came through our agency.

Starting out as a print designer, I naturally started to also think of myself as a web designer. Actually, I was both web designer and developer. All my jobs, after the advertising agency, had me in both roles. I would design web pages and features for websites and I would develop them. This is what I did.

It wasn’t until my previous job, before coming to Planet Argon, that I started to realize what I liked and didn’t like about what I did. I enjoyed designing websites, but I always felt that I wasn’t as good a designer as I wanted to be. I also realized that my favorite part of the whole process of producing websites was writing the code and making it all work. I credit this to Jeffrey Zeldman and Dan Cederholm (among others) who helped me see the beauty in clean code and pure CSS markup.

As my interest in my previous job waned, I started looking around at job listings. Coming across the Front-end Developer position at Planet Argon was like a revelation. ‘You mean I can just focus on the code and not have to worry about creating the design? Where do I sign?’. However, this was a big shift for me psychologically. For the last 15 years I had always considered myself a designer. This would be my first job where the word ‘designer’ was nowhere to be found. It freaked me out a little, but the move felt right, so I took it.

Looking back on it now, it was definitely the right move to make. Not only was I joining a super smart and fun team, but I also got to do exactly what I enjoyed doing. I got to surround myself with code and it has been awesome.

The point to this whole rambling post is to not pigeon-hole yourself. Take a look at what you do day-to-day and see if there is something in there that delights you above all your other tasks. Is there a way to build your career around that? Is there a shift you can make to focus more on the parts you enjoy instead of the parts you don’t? If there is, start making that change. This could mean finding a new job or by redefining what you do in your current position. Don’t let your past dictate your future.

The momentum of your career doesn’t have to define you. Always give yourself the opportunity to be something new. You might want to start that search on our Careers page.